Transformational Matrix 1 (1971), dimensions variable, emulsion on paper, acetate, steel pins. This work is composed of a complete line of household emulsion paint color samples. They have been arranged in a grid whose initial order is based on the numerical designation in the upper right-hand corner of each strip. The initial order of this ready-made system was transformed through the application of a successive series of “operations” that alter the numerical arrangement and, in many instances, the physical appearance of the color chips. The physical alterations of the color samples represent a literal interpretation of selected abstract operations in logic, set theory, and other branches of higher mathematics. These alterations include the substitution of individual color chips, the removal of color chips, or the attachment of an acetate overlay of color chips to an existing strip.

Transformational Matrix 2 (1972), 36 x 40 inches, hand colored photoprint mounted on museum board. The colorful array of paint sample chips is eliminated in favor of a numerical matrix. As in Transformational Matrix 1 (1971), the form of the arrangement is loosely based on the overall form of the Periodic Table of Elements. Simple operations, such as “deletion”, “displacement”, and “superimposition” are indicated literally on this map. Deletion is shown by the physical removal of a section of the substrate; displacement is shown by a repositioning of sections of the numerical matrix; and superimposition is shown by number “50” that is hand colored in cadmium red medium acrylic.

Transformational Matrix 3 (1972), 32 x 26 inches, photoprints on acetate over photoprint on paper. The penultimate work of this series moves further from the mode of representation that defines the relationship between a map of a geographic or physical territory. The form of the matrix is retained but the inscriptions bear no analogous relationship to the operations they denote. The only concession made to literalness is the fact that these “maps” are overlays; the work itself being a series of transparencies that indicate the application at different points in time of a set of operations derived from set theory, symbolic logic, and other fields of higher mathematics.

Transformational Matrix 4 (1972/reconstructed 2018), dimensions variable, transfer lettering on paper. The final work of this series turns away from the diagrammatic mode of representation to propose a performative script. The sense of a work-through-time that is literalized in a rather unwieldly fashion in Transformational Matrix 3 is replaced here by a sequence of words describing a principle of change.

The artworks on view form the core of a trajectory of work that began in late-1970 and ended in early-1972. Although a graduate student at the time at the Hoffberger School of Painting/MICA, I was able to spend the second year of my MFA program out of residence, in my home town of New York. The Transformational Matrix series emerged after a period of reflection that focused on an earlier group of artworks, about one dozen in all, that were produced between 1970 and mid-1971. Unfortunately, they are no longer extent; all that remains are the Polaroids you see pinned to the wall. These works were fabricated using canvas, acrylic paint, string, and Masonite. Their construction involved the production of a variety of forms and configurations, all of which made reference to the form of the fabric sample swatch book. Some of these works were small and hand-held, while others were larger scale works: 40 inches tall, 60 inches wide, and up to 2 inches deep. The larger works consisted of 6 – 10 sheets of monochrome stained unstretched cotton duck that were affixed to a wall with nails or suspended on string that was installed at a height of 8 – 10 feet above the floor.

I imagine those early constructions to be ironical re-descriptions of the literalness that attended late modernist painting. The works on view today — Transformational Matrix 1, 2, 3, and 4 —immediately followed in my artistic production and sought to extend the strategy of ironical re-description. As I saw it in 1970, late modernist painting constructed an aesthetic position that fixated on painting as a search for its medium-specific limits. Artists and critics that dominated my imagination at the time of my entry into graduate school — Michael Fried, Jack Burnham, Barbara Rose, Jules Olitski, Donald Judd, Helen Frankenthaler, Carl Andre, Jo Baer, Eva Hesse, and Frank Stella — were a motley crew that paradoxically spoke to me with one voice. A voice that proclaimed reduction, negation, systematicity, and intoxication with the headlong rush to the outer limits of art.

I reckoned that each of these artists was obsessed in their own way with making the central focus of their practice the relationship in between surface and edge and the elimination of illusionistic effects and any hint of figuration (if they identified as painters), or the reduction of form and the lack of incident from surfaces (if they identified as sculptors). Overall, I viewed the artists that I had gathered together as my aesthetic milieu to be iconoclasts of one stripe or another. The justification for their commitment — and initially, for my admiration of their work — is explained by a radically reductive and historicist view of art’s development.

Of course, their work rendered the categories of “painting” and “sculpture” incoherent, but that thought took shape slowly in my consciousness. As far as I can recall, I was working at a time when “pluralism” in art had yet to be raised to the paradigmatic status that it enjoys today. There was a real sense when I first began to consider myself an artist that one followed Clement Greenberg or Michael Fried or was lost. One emulated the masters, to tragi-comic effect. This sense of paucity of options, of course, was an illusion; a mind-set bolstered by the leading art critical media — in my case, Artforum — that found fertile ground in the aesthetically and intellectually naïve minds of art students everywhere. That the most interesting art of the 1960s and early 1970s revealed the medium-specific view of the categories of painting and sculpture as a dead end did not detain any ambitious art student from cranking out yards of geometric or post-painterly abstractions, or ghastly sub-Olitski color field paintings. (The fact that I was accepted to the Hoffberger School of Painting at MICA would be one of the more telling ironies of my origins as an artist, but that’s another story!)

The Transformational Matrix series was completed between December 1971 and February 1972. The use of commercial paint color sample chips seemed to me to be a natural extension of my interest in the swatch book paintings. It seemed to solve the problem of how to further generalize — and reduce — the use of and experience of pure color. By “pure” I mean color that stands for itself rather than color as a tool to depict something other than itself.

To some extent these works were haunted by my growing fascination with the projects of Sol LeWitt and Lawrence Weiner. By late-1971 I had already viewed the major exhibitions of “new media”, “information”, and “conceptual” art that were mounted in New York, such as “Software” (Jewish Museum, curated by Jack Burnham), “Information” (Museum of Modern Art, curated by Kynaston McShine), and “Conceptual Art and Conceptual Aspects” (New York Cultural Center, curated by Bernar Venet, Joseph Kosuth, and Donald Karshan). I also paid homage to one of the putative gods of Conceptual Art by visiting the Philadelphia Museum of Art to view the Walter Conrad Arensberg collection of Marcel Duchamp.

While the Transformational Matrix series may be regarded as a bridge or transition between my more painterly work and my later work with Art & Language, I see it as an emerging reaction against modernist historicism and a rejection of that particular view of art. Transformational Matrix can certainly be folded into Lucy Lippard’s notion of dematerialization of the art object, but in my view that would be an error. I say this because one of the central tenets of the modernist historicist view of art is the absolute necessity of an undialectical consumption of the image. One could argue that this is a terribly reductive and uninformed view of the actual doctrine proposed through the critical writings of Clement Greenberg and Michael Fried. But there is no reason to assume that there is a necessary path that links concrete, anti-illusionistic painting through Minimal Art to Conceptual Art. Art critical accounts that suggest there is are thoroughly historicist and entirely misleading.

One reason for my claim that the series Transformational Matrix does not exemplify the “dematerialization of the art object” is supported by acknowledging the full range of resources that informed the making of these works. It is the case that they bear the traces of my intellectual obsessions, including an interest in concepts found in linguistics (the transformational grammar of Noam Chomsky), cybernetics and systems theory (Norbert Weiner, Jack Burnham), and mathematics (particularly set theory as understood by Willard Quine, Bertrand Russell, and Alfred North Whitehead). In retrospect, the series Transformational Matrix stands in a more plausible relation to works by those artists who posed the question, “How might intellectual and expressive resources drawn from disciplines outside the normative discourse of art criticism become tools for art making?” Reflection on the significance to art of transdisciplinary practices such as those that emerged during the 1950s and 1960s in art remains for me a vital intellectual project. 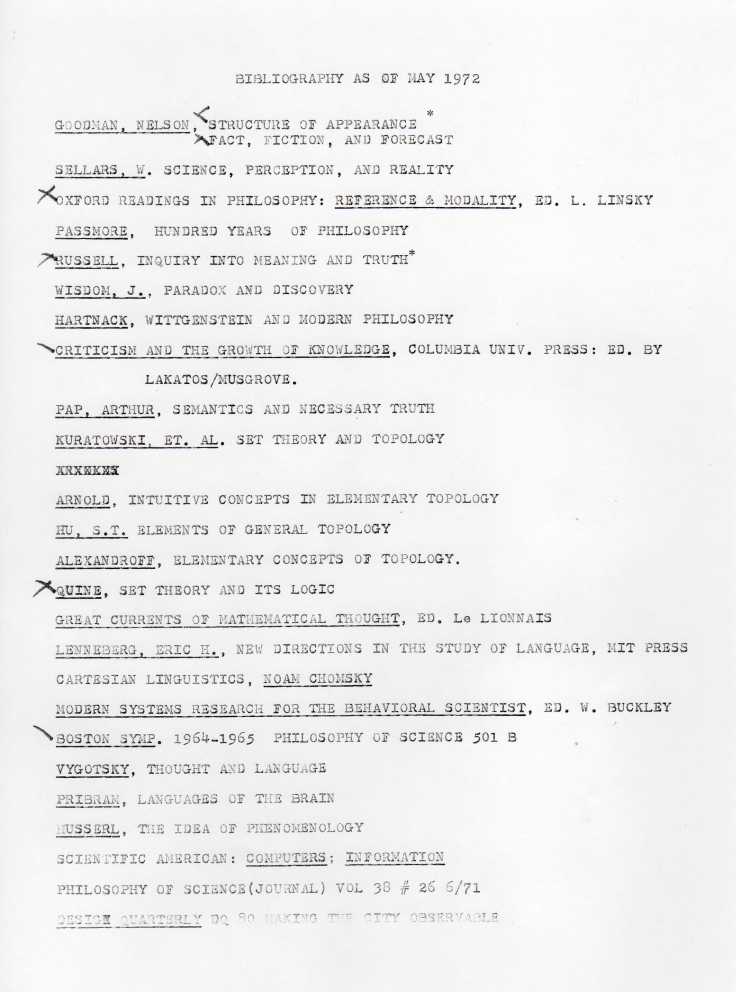 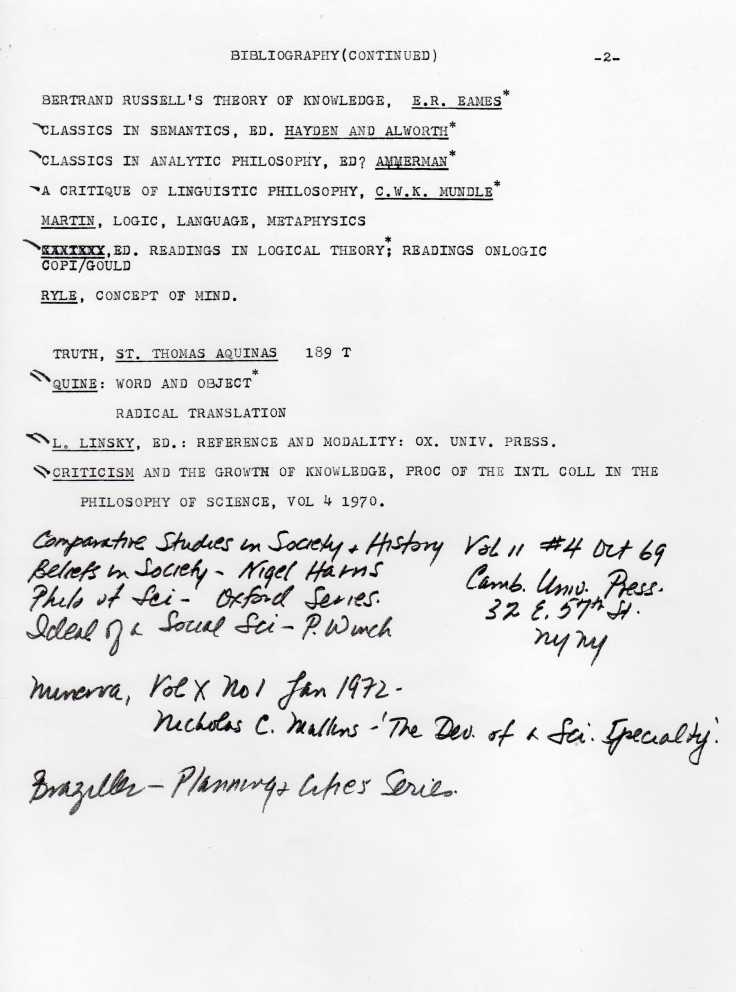 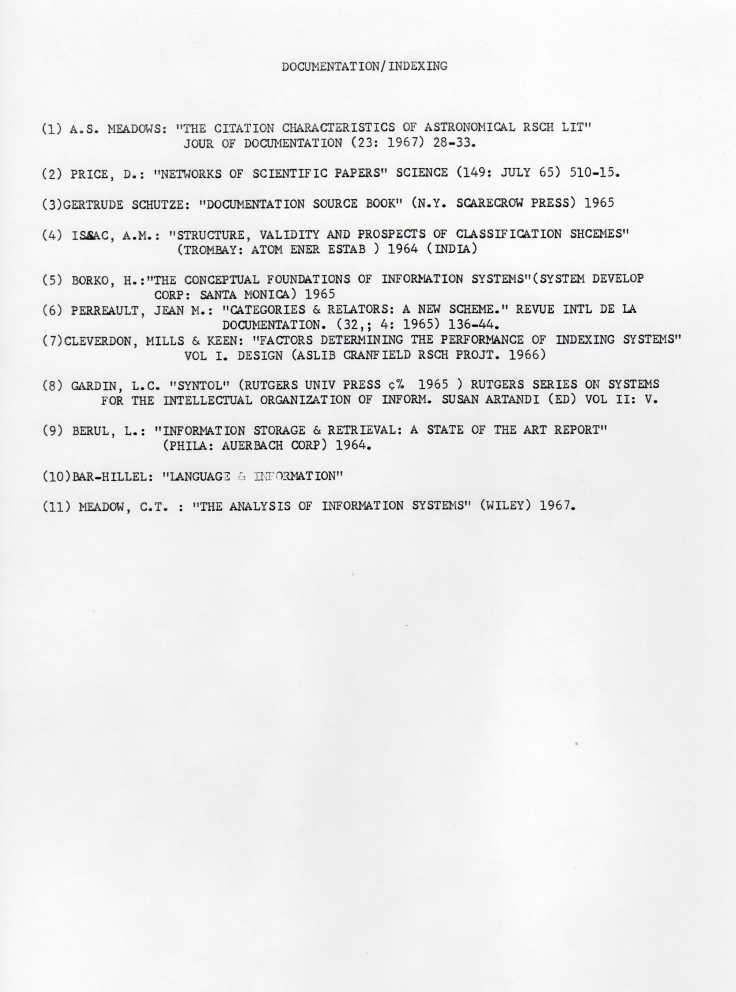 During the spring of 1972, I began to establish my relationship to the Conceptual art collective Art & Language  in earnest. I had met Mel Ramsden and Ian Burn the previous fall, thanks to an introduction by Bernar Venet, but I did not yet begin collaborating with them. The work that would eventually emerge from that collaboration — what we called “essayistic” practice — was enabled through the sharing of readings, frequent conversations, and the collective authoring of texts. The principal outlet for our work was publication in Art-Language journal. Throughout 1972 – 1974, the knowledge I had gleaned from immersing myself in the philosophy of language, the philosophy of science, systems theory, and political theory was applied to the task of unpacking what I termed the “fine structure of collaboration” of the group. When the opportunity arose for a public exhibition of Art & Language work, our attention shifted to the creation of “maps” or “indexes” to serve as public interfaces or points of entry to the sociality and conversational space of the collective.

An introduction to my practice as a participant in that collective — especially the role played in the making of our work by reading, conversing, and the sharing of information — will be the subject of part 2 of “How to Look at Conceptual Art”.